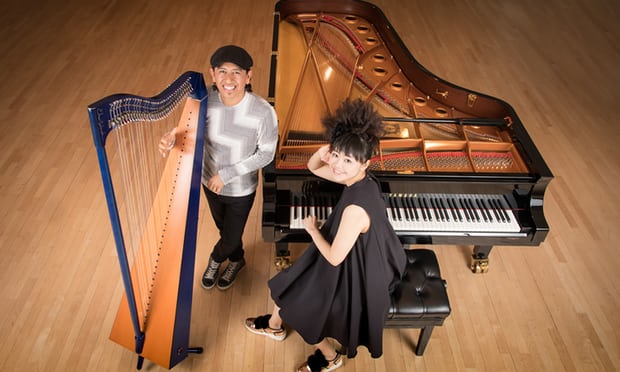 If you think about it, the harp is just a piano with its guts strewn about. Or, to be more historically accurate, the piano is a harp with little hammers. However you choose to break it down, the two go together like apples and cinnamon. Classical music has known this for centuries.

Japanese pianist Hiromi, teaming up with a Colombian-raised harp virtuoso named Edmar Castaneda, is hoping to show jazz fans what the harp can do. This is a feat rarely accomplished, unless you happen to be named Dorothy Ashby or Alice Coltrane.  In different ways, both women displayed the natural ethereal side of the instrument, but they also made it swing.

This live duet is not quite a swinging affair. It’s more of a study in improvisation and a chance to stretch the already wide swath of both players.

Hiromi’s knack for dizzying finger work, youthful exuberance and devotion to giants like Chick Corea is well-known to many in and outside the jazz world.

Edmar Castaneda is trained in the romantic classical and folk traditions of the South American harp.  But he identifies as a jazz artist. His collaborations with heavy hitters like John Scofield, Marcus Miller, Paquito D’Rivera and others do absolutely nothing to refute this claim.

This deceptively casual concert date is pure duet. It’s a conversation not to be missed. One of the best, if not unlikely, tracks is a tribute to punk-jazz bassist and Weather Report superstar Jaco Pastorius. They also due great justice to Astor Piazzola’s “Libertango.” If ever there was a jazz label more entitled to proclaim some of their stable “All-Stars,” Blue Note Records would surely top that list. Likewise, if there were a better time to celebrate the legacy of a group that’s housed Thelonious Monk, Art Blakey, Herbie Hancock and Horace Silver  than its 75th anniversary, when would it be? 80 years? Who knows what jazz will sound like then?

A safe answer would be Ambrose Akinmusire, Kendrick Scott, Derrick Hodge, Lionel Loueke, Robert Glasper and Marcus Strickland. Since 2014, they have been holding up the name and tradition of what used to be a common practice at labels and jazz festivals: The cream of the crop making music to represent their creative home, but more importantly, to showcase their own passions.

Whether any of these young composers will be the next Joe Henderson or Freddie Hubbard remains to be seen. But that is likely far from any of their ambitions. You’d be hard-pressed to find a group of players anywhere today who are doing more to breathe new life into the music.

If they needed an endorsement from the elder statesmen, they got it. Both Hancock and Wayne Shorter appear on this new disc. Think of it as a primer on what’s to come. The exquisite choice of material and the ever-evolving sophistication of this young singer are worthy of your time. Highlight: An interpretation of “Fascination” by Langston Hughes. Under 30? You can’t go wrong with B-3-driven funk and 70’s soul covers.  Over 50? Same deal except we know most of the lyrics without Googling.  http://www.organissimo.org/ If “they” are completely tone-deaf, then sure!